In many cases one of the core requirements on IT systems is to ensure confidentiality of processed data. This is especially true, if sensitive or personal data is processed. One goal of KASTEL is to provide a method that allows the systematic elicitation of requirements during the design of the system and that makes it possible to keep these requirements consistent over different stages of the development process.

Therefore, KASTEL developed a model-based approach for the specification of security requirements in component-based systems. The specification can be checked for consistency over different stages of refinement of a system and can be used to prove requirements for the implementation of single components. On the architectural level, we employ and extend the Palladio Component Model.

Let us consider a smart-metering system, which is able to reveal the electric power consumption of a household and its individual appliances using digital electricity meters. For such a system a confidentiality specification for our approach could be, for example, as follows: At the interface of the smart meter, it is specified that the energy consumer and the energy provider roles may be able to read the current count of the meter. Only the consumer is, however, allowed to read the consumption of individual appliances and consumption data split to the second. The energy provider may only know the total consumption of the household in aggregated form, for example using blocks of 15 minutes. Both requirements can be expressed with a single-lined annotation in the architectural model and are also understandable for non-security experts. In addition, for the hardware of the system it may be specified, for example, whether influences of other software components that operate on the same hardware have to be anticipated or which user roles may have physical access to the hardware. Finally, it can be expressed, for example, that an adversary with access to the data of the energy provider and physical access to the meter should be considered.

For channel modeling, we considered security requirements for confidentiality, integrity, authentication, and access control. Furthermore, we educed a catalog of generic threats on communication transactions to investigate potential attacks already in the modeling stage of development process. Confidentiality related characteristics of communication channels are locality, tamper-protection, access-control and encryption. Access-control states whether control on access, in order to use the channel for communication, is provided and encryption indicates the support for confidentiality by encryption of the message payload. 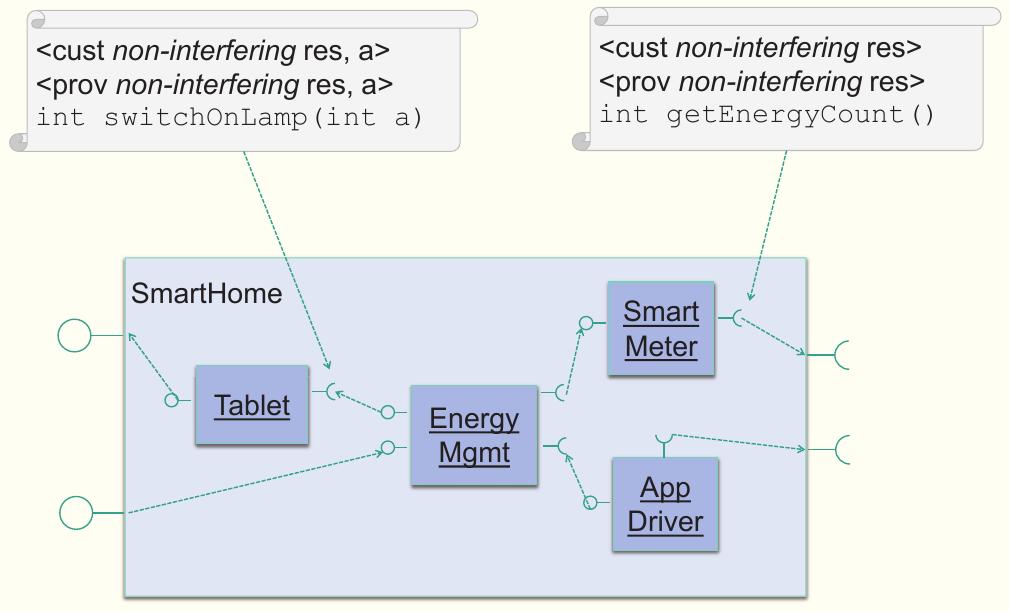 In KASTEL, we use information-flow properties of components. The Method allows to specify which information of incoming data may be encoded in the data leaving a system. The semantic definition of the specifications is formally founded, such that security can be guaranteed, in particular, for compositions of components.